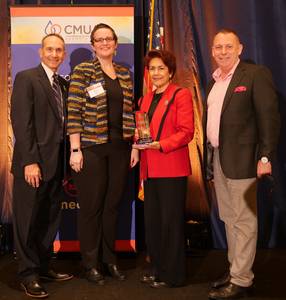 CMUA recognized Caballero (D-Salinas) for her leadership on water issues, including her efforts to represent the water community's interests on long-term water conservation and for being the author of AB 2050, the Small System Water Authority Act, which passed both houses of the Legislature last year. CMUA and Eastern Municipal Water District co-sponsored the bill.

Caballero will be carrying another verison of the bill in 2019, and she also has agreed to author CMUA'ss and ACWA's co-sponsored legislative proposal for drinking water funding.

"CMUA's Legislative Committee and Board (of Governors) strongly felt that one lawmaker stood above all the rest in addressing these issues," said Arlen Orchard, CMUA's president.

Caballero is a former mayor of Salinas and served on the City Council for seven years. She was first elected to Assembly in 2006 and served until 2010. For the following six years, she was the Secretary of the Business, Consumer Services and Housing Agency in the Brown administration. Caballero was reelected to the Assembly in 2016 and was elected to the Senate in November 2018.

"As you know, being a leader on water is not easy work. As a legislator, I look for opportunities to improve the daily lives of my constituents and hopefully all of California," Caballero said while speaking to CMUA members at Capitol Day on last week.

The CMUA Legislative Leader award criteria is based on a legislator's voting record, accessibility to CMUA staff and members, and actions supporting CMUA energy or water member agencies with significant achievement in issues areas.