The Rise of Microgrids
New Technology Is Reinventing an Old Standby
Thursday, May 2, 2019
by: Matt Williams, CMUA
Section: CMUA News 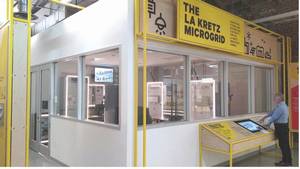 It’s easy to get overly technical about microgrids because they are complicated. Fortunately, the U.S. Department of Energy has a simple explanation: “A microgrid is a local energy grid with control capability, which means it can disconnect from the traditional grid and operate autonomously.”

Microgrids come in many types. They can be owned and managed by either a customer or a utility, and can have different types of fuel sources (e.g., fossil or renewables). How they interconnect to the surrounding utility-operated electrical grid and are locally controlled also can vary widely.

Microgrids have been around in one form or another for decades. In communities that are geographically isolated or for critical infrastructure that can’t be without power, a small diesel- or gas-powered microgrid has been a viable option for many years. Although not new, microgrids are enjoying a resurgence because of new technology.

The new breed of microgrids—how we tend to think about them today—has developed alongside the rise of renewable energy and battery technology. These systems most commonly use “solar plus storage” as the blueprint for the microgrid: Solar is the energy source, and the battery storage and advanced controls are able to balance loads and the bi-directional flows of stored energy. These microgrids are typically installed behind the meter, meaning the location of the energy generation is on the customer’s property, not on the side of the electric grid or utility. That means the customer doesn’t pay for the energy from the utility, but generates it themselves.

For customers, a microgrid can bring several appealing benefits. The power is locally generated and distributed. If the microgrid is powered by renewables, that energy is generally clean. If there’s a widespread power outage, the microgrid should be able to provide power for several hours as an “island” unto itself. In the long term, after the initial financial outlay needed to build the microgrid, the power could eventually be cheaper for the customer.

Utilities are also looking into microgrids to explore their different characteristics, potential benefits and the downsides that might be associated with them. At least a few are working on test projects that are worth watching.

What Utilities Are Doing on Microgrids

City of Palo Alto Utilities is partnering with technology company VMware on a small-scale community microgrid to learn more about the concept and test the respective roles of the utility and customer. The project, announced in late 2018, will add storage at two of the company’s existing solar installations and use those to provide backup power to some buildings on the VMware campus.

“I think it’s inevitable we’re going to have more distributed, flexible resources on the grid—and more instances of customers wanting to install these systems for their own purposes, whether that’s for resiliency, sustainability or because they want to experiment with the next interesting thing,” said Jonathan Abendschein, assistant director of resource management for the City of Palo Alto’s Utility Resource Management Division.

“Our primary goal is to serve our customers, so we have to figure out how to work with them and adapt,” Abendschein said. “It’s a customer service opportunity, and an opportunity to make the utility business model work with them.”

In the test, VMware and City of Palo Alto Utilities will study how community microgrids could impact the utility’s infrastructure and where resources could  be used cooperatively. The city might also test out some new demand response technologies. VMware was also eager to ensure the project benefits the broader community, and the city and VMware came up with the idea of includin a charging port for the city’s mobile emergency operations center, which it could plug into if there’s an extended power outage.

Abendschein said the project will be a learning opportunity for the utility and customer. The challenge, from a technical standpoint, is not insignificant.

“I think we’re in the early stages right now of understanding how you integrate distributed energy resources into the system generally,” Abendschein said. “With their smaller staff and limited resources, it’s going to take the smaller publiclyowned utilities a little longer to get their arms around the standards needed to do this.”

Farther south, the Los Angeles Department of Water & Power also is thinking big about microgrids and how to fully support them if and when demand increases.

LADWP has a few utility-driven microgrid projects in the works right now, including plans to install solar plus storage at a few city Recreation & Parks Department locations that serve as ADA-compliant cooling centers for residents. Those gridconnected assets will be maintained by LADWP and the utility will be the recipient of that solar energy. In exchange, the parks department—as the customer—will benefit financially from a much smaller behind-themeter installation, while still enjoying the grid resiliency created by the larger overall project.

“In this case, we came to a solution that works for the utility, that works for our customer, and we’re all part of the ‘city family’ too, so that makes this all easier,” said Jason Rondou, manager of LADWP’s strategic development and programs division.

Other microgrid projects in LADWP’s portfolio include a behind-the-meter demonstration project at a local fire station, as well as a 170kW solar /60-kW battery microgrid at LADWP’s La Kretz Innovation Campus. LADWP is also exploring the feasibility of a microgrid at the Los Angeles Zoo.

What stands out among the projects, Rondou said, is just how different they all are.

“The way that we electrically interconnect from one site to another, the design, the size of batteries, is completely different,” Rondou explained. “It’s not cookiecutter at all. When it comes to strategies and plans for microgrids, there’s not a one-size-fits-all for municipal utilities either. What might make sense for us might be totally different from what a smaller utility might want to look at.”

State lawmakers are showing more interest in microgrids as a means of improving disaster resiliency and moving California further toward its end goal of 100 percent zero-carbon energy. In 2018, Senate Bill 1339 was signed to encourage deployment of microgrids, particularly for large customers. The bill requires publicly owned electric utilities to develop and standardize processes for interconnecting customer-supported microgrids.

“Microgrids have the unique ability to both work with the larger grid and disconnect and operate ‘islanded,’ giving them unparalleled reliability,” Stern said. “This may sound like a luxury, when in fact it’s a necessity; when it’s the hospital near your home or the fire station in your neighborhood, you need to know the power will stay on in times of need. Microgrids provide that reassurance by remaining operational even when the larger grid goes dark. That’s why we need to do all we can to encourage microgrid innovation and interconnection in the Golden State.”

Stern said he saw firsthand the importance of grid resiliency when the destructive Woolsey Fire ripped through his district in 2018. The grid went down and essential services provided by critical infrastructure— including ensuring fire hydrants had sufficient water pressure—were threatened.

“For communities like mine, microgrids keeping the power on can make all the difference,” Stern added.

Microgrids may hold potential, but there are complex issues to keep in mind, said Patrick Welch, legislative director for energy at CMUA.

“A microgrid may help a community or critical facility ride out a power outage, but the safety aspects of microgrids themselves need to be carefully analyzed,” Welch said. “Microgrids vary widely, but are essentially a series of generation sources, electrical wires and storage infrastructure. This can pose safety challenges if not properly installed and maintained. Also, some legislators are interested in microgrids for the clean energy and to help achieve the state’s climate change goals, but microgrids for critical facilities may still involve fossil fuel or gas generation because it’s highly reliable.”

LADWP’s Rondou said California’s policymaking on microgrids must, above all, avoid being too prescriptive and one-size-fits-all. Each microgrid is different, and each one requires different levels of expertise, time and attention to manage.