A Formidable Duo
The First Sisters to Serve Together in the Legislature Are Also Playing a Key Role in California’s Water and Energy Future
Thursday, May 9, 2019
by: Matt Williams, CMUA
Section: CMUA News 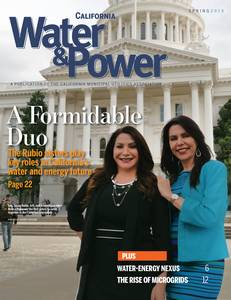 State Sen. Susan Rubio and Assemblymember Blanca Rubio are, in one word, trailblazers.

Many know them as the first sisters in California’s history to serve together in the Legislature, but that’s only part of what makes their story compelling and different.

They were born in Juarez, Mexico, and came to the U.S. at an early age as undocumented immigrants, speaking little English at the time. Their family was deported, but returned legally in the late 1970s and settled in Los Angeles. Later, as adults, the Rubio sisters became school teachers before launching successful careers in local public office. Both are Democrats.

Now they represent constituents in the San Gabriel Valley. Last year, Susan won the 22nd State Senate District race and Blanca was re-elected for a second term representing the 48th State Assembly District. They’re roommates in Sacramento during the legislative session — the first time they’ve lived together in many years.

“We always talk about accountability,” Susan said. “I’m her senator. She’s my assemblymember. And I think that’s a positive. Not only are we from the same district, we’re also each other’s constituents, so we discuss the important issues.”

Water and energy are among those important discussion points. Blanca is a member of the Assembly Water, Parks and Wildlife Committee. Susan serves on the Senate Energy, Utilities and Communications Committee. Together, they are prepared for a busy year of policymaking as the state tackles a multitude of high-profile issues, whether it’s how to fund safe drinking water for all Californians or what to do about the PG&E bankruptcy.

Prior to taking state office in 2016, Blanca served on a local water district board in the Baldwin Park area before becoming a school board member. Those experiences shaped how she sees priorities for California’s water.

“When I introduce water policy, it’s usually something that I know is going to help my region be more sustainable in terms of water, making sure that we have clean water for the San Gabriel Valley,” Blanca said.

Then she thinks about how all of Los Angeles County, and all of California, can benefit. For instance, she introduced legislation this year— AB 1093 — that would accurately assess the compliance costs of stormwater management projects for local jurisdictions. She carried the bill, in part, after learning how expensive it would be for the city of Baldwin Park to build separate stormwater and sewer water pipes to divert and recycle stormwater.

The legislation is important to her local community, but it also could help municipalities across California.

Blanca has introduced other bills this year on water treatment and drinking water standards, and is the author AB 654—sponsored by CMUA—that would allow public utilities to share customer data for scientific, educational or research purposes.

“Yes, I want to help my district, but sometimes making a vote is going to hurt Central California or Northern California,” Blanca said. “So how do we strike that balance? I’m a California representative and I don’t want to impose just Southern California values to the rest of the state, where they’re going to be hurting because of what we voted on. That’s kind of the approach that I take.”

As a first-term state lawmaker, Susan leans on her 17 years as a school teacher and 13 years of local government experience. She previously served as Baldwin Park’s elected city clerk, and then a city councilmember.

Susan said she asked to serve on the Senate Energy, Utilities and Communications Committee in part because of what happened in 2018.

“I know there are a lot of concerns as it pertains to the wildfires, so I wanted to make sure I was at the table to have these discussions, and first and foremost ensure that consumers are taken care of, but at the same time, balance the needs of a reliable, sustainable market,” she said.
There is a lot to learn. Susan said she’s interested in becoming a subject matter expert on energy issues. She’s heeding the advice she would give her students: Do the homework and research, read and listen, and attend the hearings.

She has recently traveled to some of the fire sites, including the Woolsey Fire, which last November killed three people and destroyed more than 1,600 structures in L.A. and Ventura counties. She said it was important for her to see the devastation firsthand and talk to the people and families.

“I’m not coming to the table brand new,” Susan said. “I’ve dealt with a lot of complicated issues in my own community, so I’m ready for the task, and I couldn’t be more thankful that the (Senate President) Pro Tem entrusted me to take on this challenge.”

Blanca and Susan agree that working together has advantages. After a long day at the Capitol, sometimes they see each other at home and have time late at night to compare notes and discuss each other’s bills, what happened and who they talked to. There is a thought that one could manage the other’s bills when their legislation moves to the opposite house’s floor later in 2019.

When needed, Blanca is there to give her sister advice about how to manage the busy workload of committee meetings, hearings and myriad other commitments. Susan also is there for her sister, amplifying their voices for the San Gabriel Valley.

“I think it’s been really, really fun,” Blanca said. “But more than just fun. I’m really proud to be able to be with her. We were driving in one day and I said, ‘Susan, we’re both here. This is incredible. Imagine the things that we can do.’”