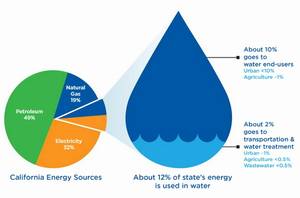 As California pushes to reduce its greenhouse gas emissions, water suppliers throughout the state are increasingly focused on the water-energy nexus within their operations, embracing innovative technologies and launching new demand-reduction strategies to decrease the amount of energy they use and increase the amount of carbon-free or renewable energy they produce.

“Water-energy nexus” is industry lexicon for the connection between energy use and water production and heating. It takes energy to produce and distribute water—chiefly through pumping—as well as to heat the water once it arrives in customers’ pipes. Conversely, in the case of hydropower, it takes water to generate carbon-free energy.

Across the state, water suppliers work to educate the public about the water-energy nexus and to adapt their operations to reduce energy demand and increase clean energy production. The shift sounds simple, but is a complicated process that requires a change in operations and dispelling myths about how much energy the water industry actually uses.

“Water-related energy use, particularly distribution and treatment, is only a small portion of the state’s overall demand,” said Danielle Blacet-Hyden, director for water at the California Municipal Utilities Association. “However, water agencies throughout California have invested heavily in projects to reduce their energy use and resulting greenhouse gas emissions. We expect this trend to continue and are pleased CMUA members are leading the pack.”

It’s long been cited by the Department of Water Resources that 12 percent of the state’s energy is used in the water sector. What isn’t commonly known, however, is that most of that energy consumption—some 10 percent—is used by water end-users such as residential, business and agricultural customers through the heating, cooling and onsite distribution of the water. Water suppliers use only 2 percent of the state’s total energy in transporting and treating the water.

Some people also mistakenly report that water suppliers use 20 percent of the state’s total energy. In actuality, they use 20 percent of the state’s electrical energy. Some are unaware that many water suppliers produce energy through hydropower, adding a flexible energy resource to the power grid that can be used as a backstop when other intermittent forms of energy wane, such as solar and wind.

As part of the water industry’s focus on the waterenergy nexus, water suppliers are increasing their efforts to use and produce clean energy and thereby reduce greenhouse gas emissions.

For decades, some water agencies have produced hydropower through larger-scale projects. One example is Placer County Water Agency’s Middle Fork Project, which produces up to 1 million megawatt-hours of energy per year.

“We’re working to benefit our customers … and the whole region” said Neena Kuzmich, engineering manager of the design and engineering services group at SDCWA.

Producing and selling hydropower to the California Independent System Operator has become a highly nuanced endeavor in recent years, subject to the impacts of other renewable resources such as wind and solar power, according to Andy Fecko, director of strategic affairs for PCWA. The price of hydropower varies greatly based on time of day and time of year. According to Fecko, hydropower is “nearly worthless” during the spring months—a previous strong period for hydro due to excessive snowmelt—now that solar and wind energy are more readily available. Hydro was mostly used during daytime peak hours. Now, solar and wind facilities run at peak during that time. As a result, hydro is most useful from 5 to 9 a.m. and 4 to 10 p.m.

Fecko said he believes the production of hydro needs to be incentivized beyond demand pricing because it is the only power in the state that is both non-carbon emitting and flexible as to when it can be loaded on the grid.

“It’s a carbon-free resource that can generally ramp up and down quickly,” he said.

Water and power suppliers are increasing their use and production of solar energy. Western Municipal Water District invested in two 1 MW solar installations. At their production peak, the projects offset 25 percent of the power needed to operate the Western Riverside County Regional Wastewater Treatment Plant and 75 percent of the power needed for pumping at the operations facility.

“The secondary benefits are maximizing our carbon reduction and being a green agency,” he said. “We’re really proud of the energy footprint reduction we’ve done.”

WMWD is not alone. Other agencies up and down California are reducing their carbon footprint through the use of carbon-free energy and conservation.

Delon Kwan, manager of resources development and watershed management at the Los Angeles Department of Water and Power, said the department has a three-pronged approach to reducing its energy use: supply transformation, demand response and facility improvements. Its strategy is similar to other California water and power utilities.

“We’re looking at everything,” Kwan said of the department’s efforts to reduce its carbon footprint. “This is a commitment our department has made.”

Supply transformation refers to reducing the department’s reliance on imported water by bolstering use of recycled water, groundwater and stormwater capture. The energy savings come from not having to pump water to move it from the Delta or Colorado River.

The utility has a goal to reduce imported water by 50 percent throughout the next 20 years.

LADWP also is making facility improvements throughout its operations to cut energy use. Conservation is a vital method of energy reduction. The less water used, the less energy needed to produce, transport and heat it.

The utility has made huge strides in messaging and facilitating conservation through rebates for energy-efficient appliances and other methods. In the 1980s, customers used around 187 gallons of water per day. That number now hovers around 110 GPD. The district has shifted its efforts to messaging outdoor conservation.

Frank Loge, director of the UC Davis Center for Water-Energy Efficiency and professor of civil and environmental engineering, said the center—in partnership with PG& E and East Bay Municipal Utility District—has developed a methodology to assess the energy intensity of water.

Loge said he hopes this type of nuanced information, and the ability to better calculate energy reductions, will help to one day monetize water conservation as a commodity on the carbon cap-and-trade markets.

“It’s motivated by our interests to try to help enable the investment of funds into the water sector by other utilities,” he said.

This story was originally published in California Water & Power magazine.