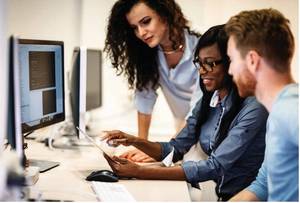 In recent years, a growing number of organizations have been working to proactively shape their workforce and change their organizational culture. California’s publicly owned water and electric utilities are part of this trend. Some are using different interviewing tactics, while others are deploying new approaches to training and clarifying organizational values. Leaders from several California POUs shared their stories and experiences.


When Leo Zalyan applied for a job at Glendale Water & Power last year, he encountered some di_erent questions compared to 2011, when he applied for a job in Glendale’s city clerk’s oce. The GWP interviewers asked Leo for examples of his communications style and his ability to work well with others.

Zalyan didn’t recall those questions being asked when he was hired by the city clerk’s oce in 2011.

“The Civil Service Commission requires the interview process to be consistent for all candidates, but within that consistency, there is room to draw out candidates on certain critical aspects of their workplace personality,” Zalyan said.

Jose Espinoza also faced some new wrinkles when he applied to be a water utility mechanic at Long Beach Water.

“My background was in construction, and that was very much a ‘learn-on-the-job’ situation,” he says. “You’re hired one day, and the next day you’re on the job site. But the academy set up by Long Beach Water provided me with up to nine months of training before I was even hired. LBW’s academy gave me all the tools I needed to succeed. I really appreciate their willingness to invest in me. I’ve never experienced anything like that before.”

After one year on the job, Espinoza was promoted to Water Utility Mechanic 2.

“The most discernible di_erence I noticed in my interviews with REU was that the questions, though they are required to be consistent, felt contemporary and more genuine,” she said. “That, in turn, prompted me to provide more honest and candid responses, rather than the stale responses so many interview questions engender.

“It was refreshing to leave an interview and feel like I was able to actively represent my own ideals rather than focus solely on what I assumed a company was looking for.”

Isringhausen was hired as a customer service representative in early 2018 and promoted to management analyst six months later.

Redding Electric Utility, Long Beach Water and and several others are part of a growing trend driven by organizations across the nation—in and out of the electricity and water industries—that are proactively working to reshape their organizational culture so they can operate more effectively in a rapidly changing market. A lot of that effort centers on new approaches to recruiting and promoting employees.

“There’s a massive amount of change going on in the energy and water businesses,” said Megan Work, a principal in the organizational effectiveness practice of Point B, a Seattle-based consulting firm. “Utilities need employees who are agile, comfortable with technology and able to operate without a detailed checklist for every task. This is likely to be an ongoing struggle because people who have been drawn to the utility business typically have not been excited about change.”

Work consults for POU clients in Washington, Oregon and Colorado, advising them on how to build a change-management capability into their organization’s DNA. Building that capability likely takes three to five years, but sometimes longer if employee resistance is widespread, she said.

Leaders need to model the changes they seek in employees, including the “soft” skills of communicating and collaborating, Work said. They need to over-communicate with employees.

“It’s a strategic journey, and you can’t just talk about it once and expect everyone to get it,” Work said. “Skilled leaders will find ways to operationalize the changes and connect the dots for employees.”

Organizations—including California’s POUs— increasingly recognize that organizational culture can be one of their biggest assets or largest liabilities.

To succeed in a dynamic business environment and better meet customers’ expectations, California POUs are hiring and promoting employees who are more customercentered, comfortable with ambiguity and better able to collaborate with others.

Some California municipal utilities have been deemphasizing the traditional skills-based interview, which focuses on whether a candidate has the requisite education, licenses and experience. While not jettisoning skill-based interview questions entirely, a growing number of POUs are asking candidates behavioral questions to determine if they could be a good cultural fit in the utility’s workplace.

Carl Mycoff, a veteran utility headhunter, views this change as a pendulum.

“All candidates need to be assessed in four critical areas: safety, compliance, cost and reliability,” he said. “If you don’t start with these four critical areas—and safety has to be No. 1—all you have is a bunch of culturally aligned employees who can’t do their jobs.”

New hires, as well as promotion candidates, still must fulfill basic job requirements. No one advocated hiring sociology professors to design a transmission line. But increasingly, executives and human resources leaders are finding that while they can teach workplace skills to a candidate, they can’t teach character.

“If a job candidate doesn’t have a lot of hydropower experience, but has transferrable skills from a related background, we can train them,” said Christina McClung, HR manager for Yuba Water Agency. “It’s much harder to try to train someone to be an effective team player if they’re missing key competencies.

“It sounds counterintuitive, but sometimes slower can be faster. We take our time with the hiring and promotion process. Making the wrong decision by not considering organizational fit can create job dissatisfaction for the applicant as well as the employer. While technical skills are very important, soft skills like communications and collaboration are just as important.”

McClung tends to pay close attention to how a candidate answers questions during the interview process.

“If we hear too much ‘I,’ and not enough ‘we,’ that could be a red flag,” she said. “Humility and the ability to listen to others are requirements to play on the Yuba Water team.”

“We refuse to lower our bar by hiring or promoting candidates that do not respect and consider other teammates’ points of view,” McClung said.

Recent issues of California Water and Power have focused on how California POU leaders are rearchitecting their organizations to succeed in today’s dynamic market.

For example, Casey Hashimoto, general manager at Turlock Irrigation District, prefers to provide employees with general direction and empower them to decide what means and methods should be used to accomplish a task.

Michelle Bertolino, director at Roseville Electric Utility and a past president at CMUA, sees a need to over-communicate because, in her experience, 99% of the time when a problem develops, it stems from a breakdown or failure in communications.

“Shortly after Arlen Orchard became our general manager and CEO, we adopted a candidate assessment process we call “21st century skills,” which we define as ability to

collaborate, emotional intelligence and ability to navigate different workplace situations,” said Rodriguez. “If an individual doesn’t have those skills, can they demonstrate a willingness to cultivate them?”

“Within California, our industry is going through so many changes, and at such a fast pace, that we need employees who are nimble and not resistant to change,” King said. “We have been successful for years, but we can’t afford to rest on our laurels. To maintain our success, we need employees who can act quickly, collaborate and innovate.”

Shifting trends around hiring practices extend well beyond job interviews at Long Beach Water. Three years ago, the utility started an academy because it was having trouble filling two types of jobs, explained Ken Bott, LBW’s director of administration.

To increase the candidate pool for those two jobs, the LBW Academy prepares enrollees for statewide certification tests and the city’s civil service exams.

During a nine-month session with classroom learning and hands-on work in the field, LBW’s managers and supervisors put academy members through the paces.

“The academy offers us and the enrollees an opportunity to see if this is a good fit,” said Bott, a 13-year veteran of the water utility. The cost of letting someone go who’s not a good fit after we’ve invested time and money in training that person, is so high. The academy helps reduce the chance that we’ll offer a job to someone who doesn’t align well with our organization. We invest a lot of time and energy in academy members, and they do too.”

Each class is limited to approximately 15 enrollees, and the attrition rate is fairly high. Bott said he’s OK with that. LBW doesn’t guarantee a job after someone graduates from the academy, but if they obtain state certifications, they can apply to other water utilities in California.

Since its start in 2016, the academy has had nearly 2,000 applicants. Roughly 29 of its graduates have been hired at LBW.

“Because they went through the academy, they hold each other accountable,” he said.

Although the academy only trains for two job categories, Bott said the water utility’s overall workforce management eorts have become much more e ient and eective since it started interviewing for character.

“As we hire employees who are comfortable collaborating, communicating and innovating, we’re finding fewer and fewer personnel issues,” he said.

Books by consultant Patrick Lencioni (see story, page 8) are required reading for leaders at Redding Electric Utility, about 150 miles north of Sacramento. Lencioni’s mantra for achieving team-oriented leaders and employees—humble, hungry and smart—has been the principle guiding REU Director Dan Beans’ eort to transform the utility the past two years.

“To succeed, REU needs employees and leaders who put the organization’s success ahead of their own,” Beans said.

The POU’s top leaders and managers spent a lot of time in 2018 absorbing and implementing “hungry, humble and smart” in a series of meetings. This year, Beans is leading a series of workshops to cascade Lencioni’s work to REU’s front-line supervisors.

REU’s employee newsletter, The Inside Line, regularly features articles with concrete examples of behavior that is consistent with the “humble, hungry and smart” mantra and what is not. A recent issue featured an interview with four senior managers about using Lencioni’s mantra in their hiring and promotion decisions.

“To me, humble is more about team success than your own personal success,” said Nathan Aronson, REU’s electric manager–resources. The humble person realizes it’s amazing what can get done if no one’s worried about who gets the credit.”

The REU managers agreed “smart” isn’t about book knowledge or where you went to school, but about being people smart.

“Being people smart is understanding how your actions and your words aect others, said Bill Hughes, REU’s electric manager– energy management. “It’s being able to interact eectively with others. Often that’s called emotional intelligence.”

“All things being equal,” Bowers said, “I am inclined to select someone who has been active in the community when they had nothing personally to gain from it. To succeed at REU, you really have to care about the community.”