California Air Resources Board Chair sets priorities and vision for the next five years
In a conversation with CMUA, Liane Randolph explains why GHGs, electric vehicles and equity are front and center
Friday, March 11, 2022
by: Matt Williams, CMUA
Section: CMUA News 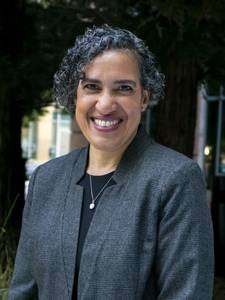 After serving from 2015 to 2020 on the California Public Utilities Commission, Liane Randolph has moved to a new leadership role at the California Air Resources Board that is both familiar and distinctly different.

At the CPUC, Randolph burnished her reputation as a commissioner who was focused on issues centered around environmental justice and equity, and the advancement of clean energy. In succeeding Mary Nichols at CARB, she expects to work on similar issues — although progress might be measured in years and decades rather than days and months.

“At the CPUC, we were very concerned about ways that our role as regulators of the IOUs (investor-owned utilities) and their piece of the electricity sector supported our climate goals and made progress toward clean energy, so there’s definitely that overlap,” Randolph explained. “One of the things about CARB is that what we do has, in many instances, a pretty long time frame. Regulatory actions take a few years or planning that looks out many years in advance.”

With that longer lens, Randolph said she is focused on three priorities at CARB: Randolph said Gov. Gavin Newsom has tasked CARB with initiating a study that looks at the potential for moving more aggressively toward those GHG targets.

“The governor has asked us to look at achieving carbon neutrality even sooner, by 2035,” she noted.

These long-term priorities require collaboration and coordination. She said she gets together regularly—usually once a month—in a “principals meeting” with the CPUC president, Energy Commission chair and California Independent System Operator CEO to kick around ideas and make sure everybody knows what everybody else is doing.

“I really think that it’s an important responsibility for us to be working together, in the Newsom administration,” Randolph said. “The Governor’s Office of Business and Economic Development is playing the traffic cop in trying to bring us all together and make sure we’re continuing to have conversations, particularly around zero-emission vehicles and how we roll that out. I’m using my experience and my past relationships in my role at the PUC to ensure that we’re all thinking about these issues, talking about them and coming up with coordinated solutions.”

There is a lot to plan for and think about. Is California’s grid prepared for more electrification of the economy? Is the state ready for the transition away from fossil fuels? How can California minimize its use of emergency standby generators to preserve air quality? How do we build a system that is resilient and affordable in the face of climate change?

Those are long-range challenges, but Randolph said CARB also is taking short-term actions to improve air quality. She noted steps that should get results include a new rule that sets up a smog check system for heavy-duty trucks and a ban on agricultural burning in the San Joaquin Valley that takes effect in 2023.

No matter the policy, Randolph wants CARB to redouble its commitment to considering equity-related issues and the impact regulations have on the most disadvantaged communities in California.

Within CARB’s Advanced Clean Cars No. 2 rulemaking for light-duty vehicles—which will set the path to reaching the ZEV executive order’s goals—one of the key topics is the equity strategies California could deploy.

“What can we require of the automakers in terms of those strategies?” Randolph asked. “We’ve had conversations with communities and a public workshop on that topic. We’re building that into the rulemaking from the very start so that when it comes to the board it will have had that component built into it. That’s the way we’re trying to operationalize it in everything we do.”