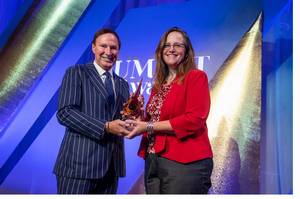 (Sacramento, Calif., October 13, 2022) — CMUA’s leadership and advocacy that was vital in bringing much-needed financial assistance to millions of struggling California utility customers during the pandemic has received a prestigious national recognition.

The Power of Associations Summit Award is the American Society of Association Executives’ (ASAE) highest national honor for the association community. CMUA is one of only six associations nationwide this year to receive the award, which promotes the invaluable contributions that associations make to America and the world.

“CMUA is deeply grateful and humbled to be recognized with this prestigious national award from ASAE,” Blacet-Hyden said. ”Above all, we never lost sight of wanting to do whatever we could to help Californians who were struggling to pay their water and energy utility bills during the pandemic.”

In 2021, as impacts from COVID intensified, CMUA spearheaded a broad coalition of water and energy advocacy organizations that successfully lobbied to secure approximately $2 billion in financial assistance from the state Legislature, with support from the Governor’s office, in order to help millions of Californians who had fallen behind on paying their water and energy bills.

CMUA quickly identified the need for the program after hearing from several of our members that many customers weren’t paying their utility bills because of financial hardship. CMUA then polled all member water agencies and electric utilities to gauge the financial hardship and get a better sense of the how much money customers weren’t paying, and combined that with data state government agencies also were collecting.

CMUA’s advocacy staff quickly decided to be bold and ask for $1 billion.

To ensure this would be consistent with CMUA’s legislative priorities, our staff went to the CMUA Board of Governors and asked if would be okay if we asked for $1 billion to pay these customer billing arrearages. CMUA’s 19-member Board of Governors asked, “Do you really think you have a chance with such a large request?” Our reply: “We think our situation — your situation — is compelling. If we don’t ask, your customers will face severe hardship.” CMUA’s Board and Legislative Committee gave the go-ahead.

As time went on, low-income Californians continued to suffer and their situation worsened. CMUA was beyond thrilled when the Governor included $2 billion appropriation in his proposed budget, double CMUA’s original $1 billion request, and expanding the concept to include customers of investor owned utilities.

“I’m still amazed how our advocacy team’s initial request for financial assistance, with backing from our state Legislature and Governor, quickly grew to become $2 billion that has helped millions of Californians in need. It exceeded our wildest expectations and is testament to the tireless work of CMUA’s staff in leading a broad coalition of members and organizations that all pulled in the same direction,” Blacet-Hyden added.

The California State Senate’s early support was crucial for success. In April 2021, the Senate approved, as part of its Build Back Boldly proposal, a Drought, Safe Drinking Water, Water Supply Reliability, and Ratepayer Assistance package that included a $1 billion. The Senate’s early leadership and decisive budget action helped build momentum for final approval of the appropriation.

"This is really a story of industry, advocates, and the government working together on behalf of the public, to step up in a time of need,” said Patrick Welch, CMUA’s senior director for energy policy and strategy. “We worked with many great partners to secure this assistance for utility customers. We’re especially grateful to the State Senate, led by pro Tem Toni Atkins.”

There was doubt that even $1 billion was realistically attainable, much less $2 billion, and the appropriation was the starting point for two unusually successful programs that have helped millions Californians who are struggling financially.

The budget appropriation occurred in summer 2021 and utility customers’ accounts were credited in late-2021 and early-2022. The Legislative Analyst’s Office has already complimented the programs’ effectiveness as an example of good government. In 2022, given the program’s success, CAPP received another $1.2 billion, with advocacy from CMUA. Additional funding for CWWAPP was not needed.

CMUA’s advocacy staff and contract lobbying firm EGRS played the lead role in the process throughout, from inception to legislative lobbying and ultimately, to regulatory implementation.

CMUA stepped forward at a time when others did not believe it was possible.  We identified the problem, developed a solution, and got others on board. We never lost sight of who we were advocating for. Our purpose was crystal clear and, as a result, developed a broad coalition of supporters and we accomplished something bigger than we ever imagined.